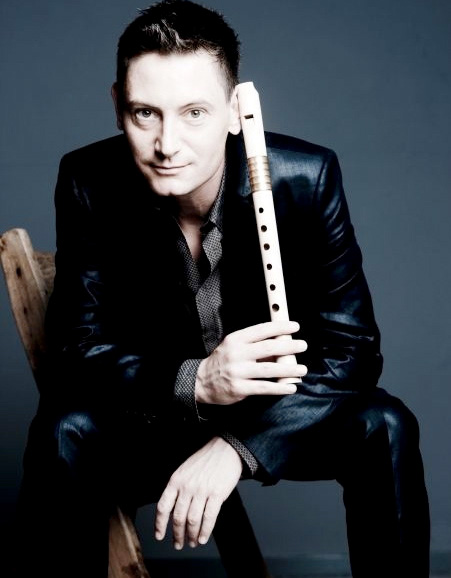 It is not surprising that he is called “Paganini”, “wizard”, “the world’s leading recorder player” or an “electrifying and inspiring conductor”. In order to live up to such high expectations, one requires not only astonishing technique, but also charisma, intellect and a special sensitivity for the music. Maurice Steger has been proving all of this to his audiences, inspiring with his intense tone and unstoppable energy in various concert formats all over the world.

As a soloist, conductor or both at once, he regularly performs with the top period instrument ensembles, such as the Akademie für Alte Musik Berlin, La Cetra Baroque Orchestra Basel, Venice Baroque Orchestra, The English Concert, Il Pomo d’oro or I Barocchisti. He also performs with leading modern orchestras such as the Zurich Chamber Orchestra, the Frankfurt
Radio Symphony, the Canadian Violons du Roy, the Munich Chamber Orchestra, the Musikkollegium Winterthur and the NDR Radiophilharmonie. It always astonishes that all these orchestras sound transformed after a period of work: sonically sensitive and individual, always historically informed and playfully expressive in the here and now.

Chamber music plays a notable role in the richly varied spectrum of Maurice Steger’s artistic endeavours. With fellow musicians and friends such as Hille Perl, Rachel Podger, Avi Avital, Daniele Caminiti, Sebastian Wienand, Diego Fasolis, Sol Gabetta and the French harpsichordist Jean Rondeau, he dedicates himself to a continuously updated repertoire of Early music. Also he is available for experimental or new formations, for example, he performs with the pianist Martin Stadtfeld and the percussionist Christoph Sietzen. Within the framework of a world premiere , together with the Kuss Quartet,
Steger will apply himself to a new concert form in 2021.

Maurice Steger loves the interaction between different cultures and getting to know other ways of working and interpretive approaches, working as a concert artist, professor and juror not only in Europe but throughout the world. Tours through North and South America, Asia and Australia have brought him together with the Australian Brandenburg Orchestra and the Malaysia Philharmonic Orchestra, among others. He was the first recorder player from the West to perform with the Traditional Taipei Chinese Orchestra.

His commitment to musical education is also extremely important to him: besides the directorship of the Gstaad Baroque Academy at the Menuhin Festival Gstaad, which he took over in 2013 in addition to diverse master classes, he invented the character of Tino Flautino in order to encourage young children to playfully engage with classical music. The recorder-playing Tino Flautino is a children’s hero in Steger’s home country, Switzerland, and the musician now presents his latest adventure with the tomcat Leo Leonardo in many countries and languages.

Through his own unending thirst for knowledge, he succeeds time and again in showing how much there is still to be discovered about Baroque music. For example, on his recording Souvenirs, he presented works that he found in the private library of Count Harrach in Naples. His album Baroque Twitter with the Basel Chamber Orchestra and the singer Nuria Rial was inspired by birdsong. The latest recording, Mr. Handel’s Dinner, with La Cetra Barockorchester Basel was released in the spring of 2019 and reflects on Handel’s opera performances and especially their intermissions in London. The recording was received with enthusiasm by listeners and the press.

Steger regularly tracks down baroque and early classical rarities, conducts and plays them or releases them on CD. Maurice Steger has received many awards for his work, including the Karajan Prize and the ECHO Klassik. One sometimes wonders where Maurice Steger finds all the energy with which he has helped the recorder to make a comeback, as Arte recently presented in a documentary The Recorder: A Comeback.

But when you see how much love for the recorder, the music and the audience he demonstrates in each of his many projects, it becomes clear that Maurice Steger is carved from the same special material as his beloved instrument.