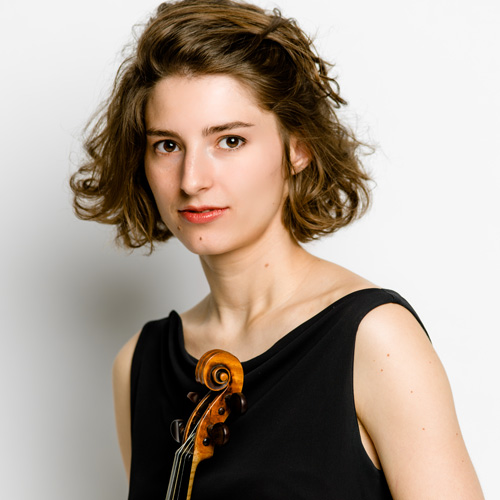 Born in 1992, the French violinist Anna Göckel has already graced several of the world’s greatest stages, from Tokyo to the Mexico Opera, trough the Théâtre des Champs- Elysées in Paris, the Victoria Hall in Geneva, the Herkulessaal in Munich, the Montreal’s Musée des Beaux-Arts, the Salle Flagey in Bruxelles and the Festival de la Roque d’Anthéron.

She has been nominated as newcomer of the year 2016 by the French-Grammy “Révélations Classiques de l’ADAMI”. Her curiosity leads her to explore all eras repertoire, from baroque period on historical instruments to contemporary music.

Passionate at a young age about the world of chamber music, she founded the Karénine Trio, and at 21 years of age she won with this ensemble the prestigious ARD International Music Competition in Munich. She shared with this trio five intensive years of musical exploration and concerts. She was invited to study and perform at the String Quartet Seiji Ozawa Academy, at the European Chamber Music Academy, and at Ravinia’s Steans Music Institute. In 2019, she is invited to join two of the most prestigious residencies for chamber music: the Open Chamber Music session of the International Musicians Seminar Prussia Cove (UK) and the Marlboro Music Festival (USA).

She studied with Luc-Marie Aguera, and at the Hochschule für Musik in Saarbrücken with David Grimal, having previously worked with Boris Belkin in Netherlands, Jean-Jacques Kantorow in Paris Conservatory, and with the Ysaÿe Quartet. She has also been inspired by master classes with Menahem Pressler, Ferenc Rados, Donald Weilerstein, Maxim Vengerov, Hatto Beyerle and Miriam Fried.

Her concerts have been broadcast on France Musique, the Bayerische Rundfunk, the Saarländische Rundfunk (Germany), the Österreichischer Rundfunk (Austria), the RTS (Switzerland), Radio 4 (Netherlands) and Mexico. Invited by Rolando Villazón in the TV SHOW “Stars von morgen” (ARTE ; 2014), by Anne Sinclair in “Fauteuils d’orchestre”(France3 ; 2019).

With the support of the Belgian Foundation “Fonds Fravanni / Fondation du Roi Baudouin”, Anna released in January 2018 her first solo recording of Bach’s Six Sonatas and Partitas on the French label NoMadMusic. The album received the « Coup de Coeur Classica ».

Thanks to the generous support of the Fondation Boubo Music, she plays on a violin made by Giuseppe Guarnerius.